Back to all posts

As February is coming to a close it occurs to me it's been a while since my last blog post. The myriad of "experts" on the topic of success in the new music industry say ya gotta stay up on this stuff, and while I'm not sure I agree, I HAVE received a few "inquiries" as to the recent happenings. So here I am to not only address those inquiries, and while I'm at it I'll add a few that..... um...... nobody has asked about.... Ha! Though I may spread it out across a few posts. We'll see...... 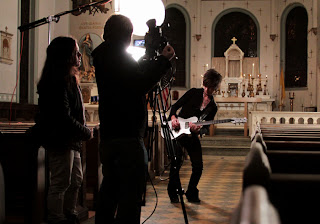 So at this moment the happening that comes to mind first is the Immersion video, simply because I'm due to see the first edit mid week and I'm nervously excited to see it. We shot the video in early January and it was a cool experience. I approached this one very differently than the Madness video. Whereas Madness was written about just that... madness and the voices OF madness, Immersion was inspired by the concept of soul searching. By looking deep into one's self to reveal, discover, unravel.... whatever may be in there. This to me, had to be solitary. The same way in which it was written, did I wish to visually display it. Alone. So no band, no actors..... just me. This was difficult on a host of levels and was met with some resistance, but it DID seem the most honest to the song. So how to portray soul searching? I had several ideas but decided to use a Church. Where would someone go to uncover the deepest part of the soul? To me the church confessional kept coming to mind....  People bring all of their good AND bad to their God. Confess, ask, search.... etc. So the idea was set in motion. Now..... let's find a Church that will allow a crew of people in for a few days, with all kinds of gear, guitars, cameras, crew... etc. NO PROBLEM!! YEAH!! Well it wasn't as difficult as I anticipated, confirming I was on the right path for the project. We found an abandoned Church in Poughkeepsie that in spite of the fact that it had been empty for a decade, it was left rather eerily intact. So we shot it in a day....  shorter then we expected on account of the visitor we encountered at sundown. A bat. He decided he would be a most unwelcome party crasher and zip around the church gracefully weaving around the crew. I ducked into the confessional and shut the door. I hear they are very docile creatures but I wasn't hanging around to see his gentile disposition up close. I was willing (hoping) to end the shoot at that very moment. Instead, the Director "directed" a crew member to be on " bat patrol" and keep a sharp eye on the antique and rather beautiful church organ, where the bat had ducked into after realizing he wasn't gonna get a cameo in the video. I found it enormously difficult to concentrate on ANYTHING BUT the bat, but we managed to get a few more shots in and high tailed it out of there. All in all in was a great experience.... a learning AND rewarding experience. Normally I obsess to the point of distraction over a project, song, idea.... pretty much everything. I carefully tried to be true to the original concept.... Conceptualize, report it, shoot it, move on. I let the director and crew do what they do best and though it took a great deal of discipline to surrender and trust....... if the final product is cool I can say with confidence that perhaps over obsession is unnecessary. As my Father says, Time will tell.

Ok so, it will take a few posts for the latest. Stay tuned!!